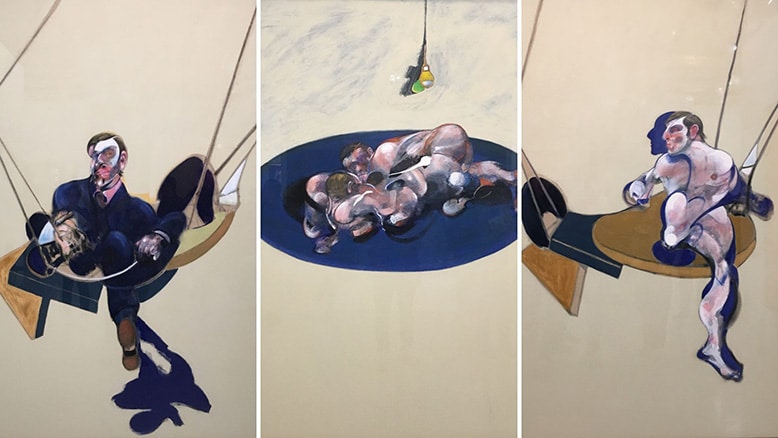 From 11 September 2019 to 20 January 2020, the Centre Pompidou will continue its review of major artists who have marked the 20th century. For this purpose, he dedicates a vast exhibition dedicated to Francis Bacon to him.

I tell you about it and share my impressions with you.

Throughout the duration of the temporary exhibition, the Centre Pompidou is undergoing renovation. In addition, because of the importance of Francis Bacon, you need to book your ticket to discover what is in Gallery 2 on the sixth floor. Indeed, you may have to show your ticket to be able to enter the museum alone.

Plan around an hour between the first and last work to enjoy this temporary exhibition dedicated to Francis Bacon, a rare event.

To recover from your emotions, I invite you to take part in our guided tour of Les Halles and the Centre Pompidou to discover the other treasures of this historic district of Paris.

The sense of the visit of the Bacon exhibition

“Great poets are formidable image triggers, their words are essential to me, they stimulate me, they open the doors of the imagination to me. This quote from Francis Bacon sums up this temporary exhibition. Its guiding principle is based on the Irish artist’s passion for literature, philosophy, poetry and Greek tragedies through six rooms set up in staggered rows along the way. They replace the traditional wall explanations to understand the artist. Inside, speakers read Les Euménides d’Eschyle (Room 1), La vision dionysique du monde by Nietzsche (Room 2), La Terre vainine by the English poet Eliot (Room 3), an extract from the Mirror of the Bullfighting by the writer Michel Leiris, writer, ethnologist and French art critic (Room 4). Then you listen to Au cœur des Ténèbres by Joseph Conrad (Room 5) and finally Abattoir by Georges Bataille, French writer (Room 6). These so-called “reading” rooms provide the necessary relief to understand all the paintings presented.

Plan of the temporary exhibition Bacon at the Centre Pompidou

These literary works all come from Francis Bacon’s impressive library. Thus these reading rooms are as many sentences retained or memorized by the painter. These haunting phrases, especially Aeschylus’ verse “the smell of human blood never takes my eyes off me” and inspired his work.

In all, some sixty masterpieces are on display, including twelve triptychs. They all come from the last twenty years of the artist’s life, after the death of his companion who committed suicide on the eve of the opening of his previous major Parisian exhibition at the Grand Palais in 1971. This period of his life is the most highly rated in the art market but also in the eyes of the public.

If you don’t know Francis Bacon and his story, you may be as confused as you are surprised at first. This was my case. It was by listening and listening to other visitors that I was able to learn more about this unique bipolar style. The geometric shapes are very well drawn. The background is formed by a very rigorous flatness of bright colors, composed of lemon yellow, candy pink, orange… An incandescent and innocent palette that provokes an emptiness, an abstract decoration, simple, refined and frozen. It is completely opposed to moving and tormented human figures, sometimes painted with a single gesture, whose colours are darker and their features more pronounced.

In his triptychs, movement is represented by showing the same subject at different times, linked together by an accelerated gesture.

But then why such an opposition between the different plans?

Quite simply because Francis Bacon wanted to paint life itself, the one that is by definition in constant motion, and so difficult to capture with a frozen canvas. Bacon’s style is then expressed by painting the movement, to fight against a static state that he refuses, an impression that is accentuated by a figure in front, and a simple decoration in withdrawal.

It combines the softness of the colours and the tortured violence of the murky images, in order to attract the viewer’s attention. He paints the memory alive and blurred at the same time, he embellishes nothing and gives us life as he perceives it, like a Greek tragedy. His sense of composition is breathtaking, because he can say everything in a few lines.

In 1926, at the age of 17, his father drove him out of the family home following the discovery of his homosexuality. As a reminder, it was not until 1967 that homosexuality was decriminalized in England. In 1934 (25 years old) his first solo exhibition took place. But wounded by critics, he destroyed his own works. 7 years later, he volunteered in civil defense but his asthma prevented him from going further. This non-exhaustive list of hazards has forged the unique and tortured personality of this phenomenal artist.

Refusing conventions, he is one of those sulphurous artists who prides himself on having had no master or real school.

The suicide of his companion and model George Dyer in 1971 was an upheaval for him. The next day, Francis Bacon made history as the only painter with Picasso to have a retrospective dedicated to his art at the Grand Palais. This premature death obscured the artist’s last twenty years, then at the height of his glory. Three triptychs are dedicated to the man with whom he had a stormy relationship for seven years, where they never left each other. Breathtaking, Francis Bacon’s torment is revealed and his guilt with it. The same one that is found in Les Euménides qui le poursuivent, once again taking up the image of the Greek tragedy.

The bullfight seen by Francis Bacon

In the middle of all these tables, seeing the Study for Bullfighting No. 2 intrigued me. The presence of bullfighting culture surrounded by tortured faces and deformed characters finds its reason in Michel Leiris (Room 4). Influenced by their respective taste for violence, Bacon conducted three Studies for bullfighting in 1969, including those you can admire.

On Bullfighting Study, which will be his last painting, the panel is white and a black shadow seems to float. The real dust that the artist himself has collected in his own studio blurs the paws of the beast that we don’t know if it comes out or enters the arena. This is the ambiguity of the work.

The violence, but also the sexual character evoked by the bullfighting, attracted Bacon, who considered it, like boxing, as “a wonderful aperitif for love”.