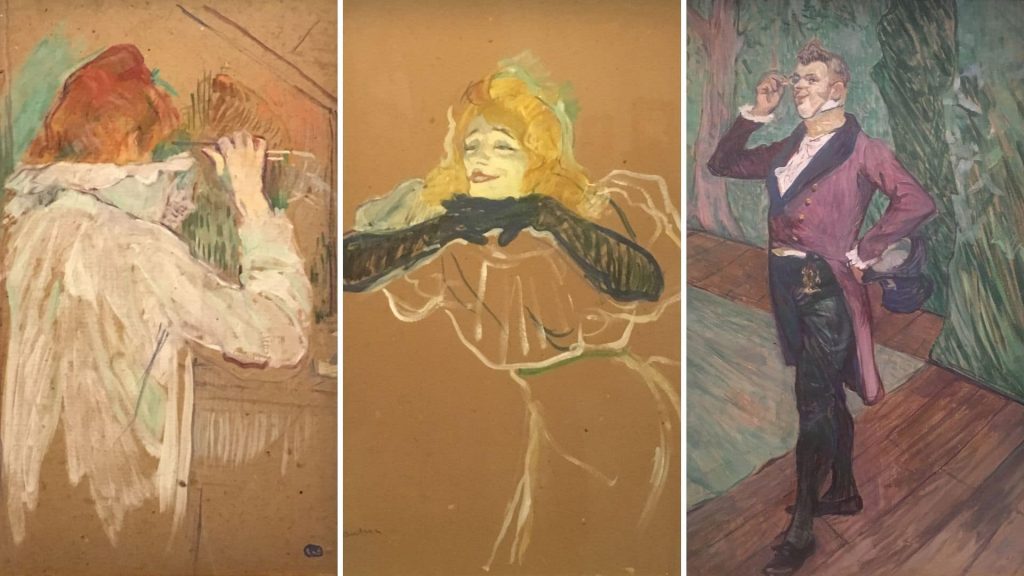 From October 9, 2019 to January 27, 2020, Henri de Toulouse-Lautrec is in the spotlight at the Grand Palais. The temporary exhibition devoted to him, the first French retrospective since 1992, presents him as “Resolutely Modern”.

After visiting it, I will explain why and give you details of this cultural event.

The 200 works in this temporary exhibition at the Grand Palais present his life as an artist, faithful to cabarets and brothels. In this era full of technological and artistic advances (the Impressionist movement is contemporary), he was a troublemaker. He who loved to dress up, was interested in men and women as well as in different religions, expressed himself through caricature. Henri Marie Raymond de Toulouse-Lautrec-Monfa, with his full name, wanted to “look real and not ideal”.

Coming from one of the oldest noble families in the south of France, his parents were first cousins and had two sons. Inbreeding was then customary in order not to divide heritages.  Unfortunately, his younger brother died at one year of age and developed a bone disease that prevented him from growing taller than his 52 metre, and he had fragile bones, short limbs, deformed lips and nose. The early death of his younger brother influenced his lifestyle, he lived in haste as if he too was afraid of dying young.

In 1875, his health forced him to leave high school because normal schooling was incompatible with his care. His mother then took care of his education and he discovered the works of the painter René Princeteau, his father’s friend. It is from there that he began to paint and draw. In 1881, he failed his baccalaureate exam but passed the catch-up session in September in Toulouse. He then went back to Paris where he attended Princeteau’s studio and organized his life as a painter. Introduced by his mentor, he entered in 1882 the studio of the painter Léon Bonnat, near Degas, then Fernand Cormon’s studio in Montmartre. There he met Émile Bernard and Vincent Van Gogh, whose portraits he painted. Then he settled permanently in Montmartre and spent most of his adult life drinking a lot of alcohol and used to mix absinthe with cognac.

Electrified by the speed and prowess allowed by the technologies of his time, he painted movement. A large part of the works presented are not on canvases, but on cardboard. As if, in the haste of his genius, this lightweight and therefore easily transportable support for him, was the best way to achieve his goals and to capture as much as possible what he had before his eyes. According to him, painting is a fiction but it must be part of the lived experience.

This temporary exhibition offers a chronological tour of the artist’s works, spread over twelve rooms and two floors. The entrance is on the Champs-Élysées side.

From the third room on the route, women are taking more and more places among the works on display. Except for La Grosse Maria, few are represented so far. It is with Carmen Gaudin as subject that we find the artist’s passion for these models that he frequented almost in their intimacy. He had a room in La Fleur blanche, a former brothel. Female role models are defined by the floating of their status and identity. Carmen Gaudin is however identifiable. This redheaded woman seems to obsess the painter. With Rousse, we perceive Degas’ influence in his work, with the subject of his back, his legs spread out, wearing stockings and standing in a crowded room.

Further on it is Louise Weber, known as the Goulue, who is represented. We see the eccentric dancer who imported the cancan from England to France on a poster commissioned by the owners of the Moulin Rouge. The composition is for the time, and still today, so original that it strikes his contemporaries. With this poster, the artist considered as the soul of Montmartre, since he resided there in 1884, has just successfully entered the emerging world of advertising. On this one, Toulouse-Lautrec concentrates the dynamism of dance and the magic of modern lighting. The whole thing has an erectile aspect resulting from the explicit male stiffness in the foreground. As for the female rustle, it is admired by dark silhouettes in the background. La Goulue, an absolutely non-penjorative term, seduced the Albigensian painter with its vitality to the point of inspiring him to many paintings and lithographs, during the two years following the commission of this poster.

On the official poster of the Grand Palais exhibition, it is the figure of Yvette Guilbert who is presented, another woman and great subject of Toulouse-Lautrec. It is at the bottom of the Montmartre hill, in the rue des martyrs, at the Japanese Divan (where strip-tease was invented in the 1960s) that they meet. In this concert hall, he discovers this redheaded woman, whose cheekiness and audacity on stage fascinate him. On the work in question, she wears black gloves on her long arms that accentuate her slimness and she is painted on cardboard, once again as if to better freeze it as it appears during her performances.

Finally, the Elles suite, published in 1896, is the one that corresponds to the period of his life, when he settled in a brothel. This lithographic set is devoid of scabrous or perverse glances. But the artist goes even further with one of his masterpieces: At the Salon de la rue des Moulins. Produced on canvas and not cardboard, this work is the result of several studies taken on the spot. We see women of imperturbable joy waiting there. Depriving the notion of time in this painting painted in the studio, the passive expectation of these women in this confined space shows us an almost suffocating luxury.

The men perceived by Toulouse-Lautrec

This is not the effect expected by the exhibition, but during my visit, the artist’s feeling of duality between women and men emerged. Men are shown in a dark, wait-and-see, sitting or, as previously explained, erectile manner.

The portraits of Paul Leclercq, Van Gogh, André Rivoire and those of the Bal du Moulin de la Galette represent men above all spectators. When they are standing, they are often in profile with their hands in their pockets or in front with a curved posture, as on the Moulin Rouge poster, always spectators. Perhaps it is the artist’s bias to express himself about his relationship with his father. The latter separated from his wife and cousin while the young Henri was raised by his mother. After a stroke in March 1901, the artist who eventually died in September gave his last words to his father, a whimsical aristocrat and passionate hunter: “I knew, Dad, that you would not miss the hallali”. This represents the sound emitted by the hunting horn to announce that the beast is on its way. Unsatisfactory image that the young artist thought his father had of him.

This analysis is personal and it is up to you to share this idea or not, the beauty of art lies in the fact that everyone’s imagination feeds their own interpretation of the works.

Among the posters displayed here in the Grand Palais, the triptych of Aristide Bruant in his cabaret. Toulouse-Lautrec illustrated about forty songs, hits mainly performed in the three great Parisian cabarets of the time. To highlight Aristide Bruant, he therefore created this series which helps us to understand his working method.

You can also admire the famous poster created for the Salon des Cent during the international exhibition… of posters.

The visit of the exhibition

In conclusion, allow about an hour and a half from the first room to enjoy all the works on display. In this wing of the Grand Palais, there is room to move around and the paintings are very well displayed. It lasts until January 27, it’s just waiting for you now. As a reminder, the last major retrospective dedicated to Toulouse-Lautrec dates back to 1992…